Honoring the Past, Building the Future 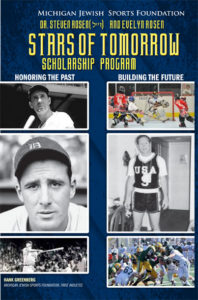 Steve Rosen was inducted into the Michigan Jewish Sports Foundation in 2009. Steve was a high school track star who won the county championship in the high jump and was the runner-up in the 180 yard hurdles. At the University of Michigan, he competed on the track team. As a varsity trackman, he placed in many dual meets and several invitational meets, and participated in the Big Ten Championships. He lettered in track at the University of Michigan in 1971. He went on to graduate from Wayne State Medical School and practiced Radiology from 1978-2006. He was a starter for the U.S.A. basketball squad in the 35-and-over division of the Maccabiah International Games in Israel in 1993. Steve continues to be involved with Michigan track as an official for the University of Michigan track program.

The Dr. Steve (z”l) and Evelyn Rosen scholarship program strives to build athletes for today’s competitive and academic environment. While not every athlete will make it to the big leagues, all who are recognized will have shown the passion and promise that personifies members of the Michigan Jewish Sports Hall of Fame, such as Hall of Fame Class of 2009 inductee, Steve Rosen.

This one-of-a-kind scholarship program is designed to assist Jewish High School Seniors who have dedicated themselves to achieving outstanding academics while also accomplishing and competing at the highest athletic level. Candidates will be judged by many factors including financial need, athletic, academic achievement, community service, and extra-curricular activities.

Every now and again there is an athlete that transcends the game. The Michigan Jewish Sports Hall of Fame’s first inductee, Hank Greenberg, whose dynamic life and legendary career in baseball, was just such an athlete. The Tiger great had the admiration of his teammates and his fans. When Hank grew up playing sand lot ball there were no baseball camps, training regimens or organized youth teams. He would play from sun up to sun down, honing his skills and sharpening his talents.

JN Athlete of the Year

The highly competitive Jewish News High School Athlete of the Year awards are based on outstanding athletic achievement by male and female Jewish high school athletes from Michigan. Presented in conjunction with the Detroit Jewish News, our recipients have traditionally been graduating seniors recognized for their career accomplishments. Students can nominate themselves, be nominated by a coach and/or parent, or be nominated based on research conducted by the MJSF selection committee.

JN Athlete of the Year Past Recipients